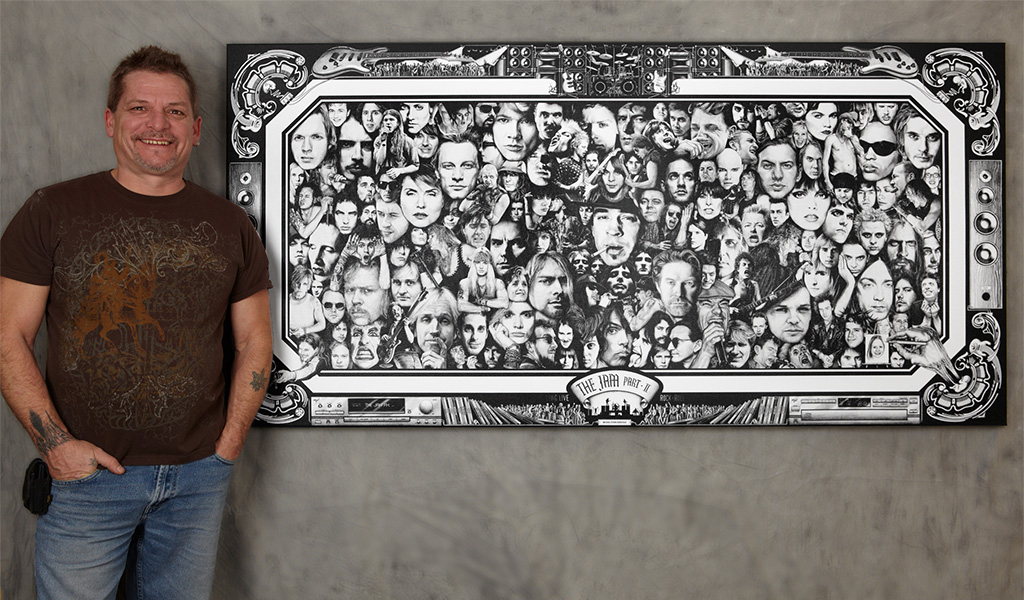 Who is this guy?

Canadian artist Michael Keirstead is the oldest of six children. As a teenager, Michael embraced the Rock music scene with a passion and motivation that put a twinkle in the eye of every person who knew him! In his late teens Michael conceived the idea for what was to become “The Jam” series, but it wasn’t until the early 80’s that Michael began to pursue his idea for a monumental 8×4 foot stipple art drawing. Five years of research and artistic persistence led to the completion of “The Jam Part 1 – A History” in 1987. The Rock & Roll lifestyle has been good to Michael Keirstead and he finished his second magnum opus documenting the continual evolution of modern rock music, “The Jam Part 2” in 2002. “The Jam 2” is a perfect companion piece to “The Jam Part 1”. Either as stand-alone works or viewed together, “The Jam” series of prints unites generations of music lovers.

Indeed, Canada is proud of Michael Keirstead for providing the world with a legacy. “The Jam” series is a brilliantly researched, hugely entertaining, intricate and beautiful tribute to the classic Rock musicians whose music shadowed our lives. It also serves as a testament for almost five generations of music lovers’ worldwide. To mark “The Jam Part 2” as a Canadian piece, as well as to date it, Michael Keirstead placed the current Prime Minister Jean Chr?tien onto the canvas. Ditto for Brian Mulroney’s signature chin on “The Jam Part 1”.

Currently Michael is living and partying in beautiful British Columbia on the west coast of Canada.

Michael Keirstead’s early years were spent on the east coast in the Maritimes where he was tutored by a prominent Maritime artist Reverend Randolph H. Nicholson, his grandfather.

During his early teens Michael spent time in art school in Toronto where he received some formal art training. His oil paintings from that period generated a good deal of interest at several Ontario art galleries where they were displayed.